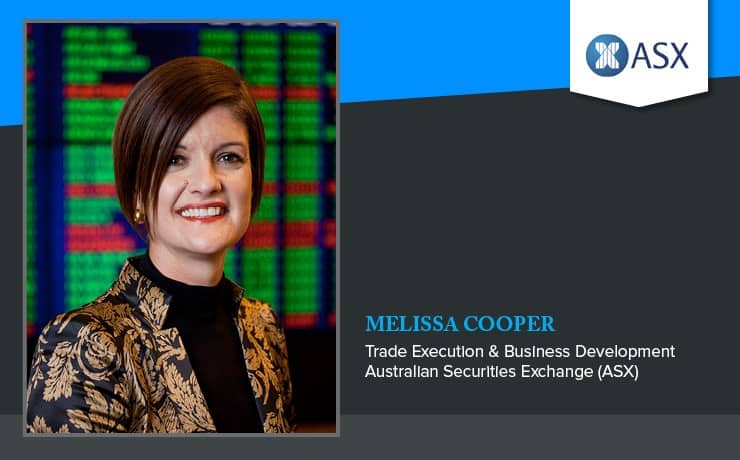 Share trading in Australia has evolved dramatically over the past 160 years, from chalk boards and share scripts to dark pools and algorithms. While its origins date back to the gold rush of the 1850s, it wasn’t until 1 April 1987, when the six state-based stock exchanges amalgamated, that a single national exchange, now known as the Australian Securities Exchange (ASX), was created.

In 1860, there were no less than 10 specialist brokerage firms in Melbourne that joined together to publish The Stock and Share Journal. In April 1861 they formed the Brokers’ Association and went on to publish 63 rules outlining the procedures for admission to the Stock Exchange of Melbourne.

In May 1871, the Sydney Stock Exchange was formed. Over the course of the following 30 years more exchanges were established in Adelaide, Brisbane, Hobart and Perth. These exchanges operated independently until the amalgamation in 1987.

While the method of share trading has changed significantly over this time, the fundamental role of the ASX has remained constant: to provide an avenue for companies to raise capital to fund their growth and opportunities for investors, both retail and institutional, to invest and build long-term wealth.

In the early days, share trading was conducted on a trading floor, where buyers and sellers gathered and transacted with one another. The earliest method of trading was the auction-based call system, which saw a stock exchange employee (the Caller) call the name of each listed stock in turn while Members bid, offered, sold or bought the stock at each call.

This system proved inadequate to handle the increased volume of trading during the mining booms. It was replaced by the ‘post’ system in the early 1960s, which involved stocks being quoted on ‘posts’ or ‘boards’. ‘Chalkies’ were employed by exchanges and it was their function to record in chalk the bids and offers of the operators (employees of stockbrokers) and the sales made.

In 1967, the first computer arrived at the Sydney Stock Exchange. Soon after, an electronic price dissemination system – the Stockmaster – was introduced so stockbrokers could receive bid, offer and last stock prices at their desk.

Automated stock trading was introduced in 1987, with the launch of the Stock Exchange Automated Trading System (SEATS). Three years later the ASX trading floor was closed completely and all stocks were converted to SEATS, with ‘SEATS operators’ ending the reign of the `chalkies’. The SEATS operators would enter the bids and offers manually into the new system.

From 2000 onwards, it was all about the rise of the machines. Rapid advancements in technology and information dissemination fuelled the rise of algorithmic-based trading. Algorithms (algo’s) would trade orders electronically and partly replace the manual input of trades in the market. Initially, algo’s were vanilla in nature and would trade an order `in line’ with volume or over-the-day `VWAP’ (volume weighted average price). They quickly became more sophisticated, being either more `aggressive’ or `passive’ in trading nature, adopting exotic names like `sniper’, `dagger’ and `viper’.

Around this time stock brokers were developing `crossing systems’. This algo would detect when a broker had a buyer and seller in the same stock, at the same price and would `cross’ the stock between the two counter parties before trading with other buyers and sellers in the market. This ability to internalise executions without any pre-trade transparency to the wider market contributed to the growth in non-exchange trading and so-called dark pools.

Dark pools are execution venues that are not transparent (ie `in the dark’) until a trade occurs. Unlike the `lit’ market where you can see the bids and offers of a stock before you trade, dark pools publish no information ahead of a trade. Dark pools are venues that typically sit at the mid-point of a stock’s bid and offer. For example, if Telstra is $4.52 bid and $4.53 offered, the mid-point is $4.525.

ASX launched its very own dark pool – or anonymous mid-point matching service – in 2010, called Centre Point. ASX developed Centre Point to give investors greater choice of, and control over, their trading orders in a fragmented market, where multiple execution venues exist. Trading in Centre Point has grown steadily since its launch, trading $9.3 billion in value in February 2017, which represents 9.6% of ASX on-market, share trading. Centre Point currently trades between $400 million to $500 million in value every day across over 800 stocks. As at February 2017, it had delivered $869 million of price improvement to buyers and sellers since inception.

There are a number of reasons trading in Centre Point has become so popular. Firstly, and most importantly, Centre Point offers price improvement. Buyers of Telstra, in our earlier example, would generally prefer the better price of $4.525 at the mid-point rather than pay the offer price of $4.53. There are no guarantees of an execution at $4.525 but by checking Centre Point there is the potential to get a better fill on your order at $4.525, before you pay $4.53.

Secondly, for larger institutional orders, Centre Point protects the value of the information in the order. When executing large orders, minimising information leakage and price impact produce the optimal outcome. Putting a large order into the `lit’ market signals your intention to buy or sell. By executing in Centre Point, no information or signals are sent to the market until after the trade is executed. All trades are reported real-time.

ASX is a licensed market operator, with the rules and procedures for transacting in Centre Point publicly available. Moreover, unlike many other operators of dark pools, ASX does not participate in the trading so there’s no conflict between the exchange and investors.

ASX is committed to providing an exchange for companies to list and for retail and institutional investors to invest. When buying and selling shares, investors should be aware of all the options available, particularly when it comes to saving a bit of money. Next time you’re investing in shares, ask your broker about accessing a better price in ASX’s Centre Point.

Melissa Cooper is responsible for Business Development for ASX’s equity market including trade execution and sales. She joined the ASX in 2013 after 12 years as a Portfolio Trader at Citigroup where she was responsible for trading equity portfolios for domestic and offshore funds.