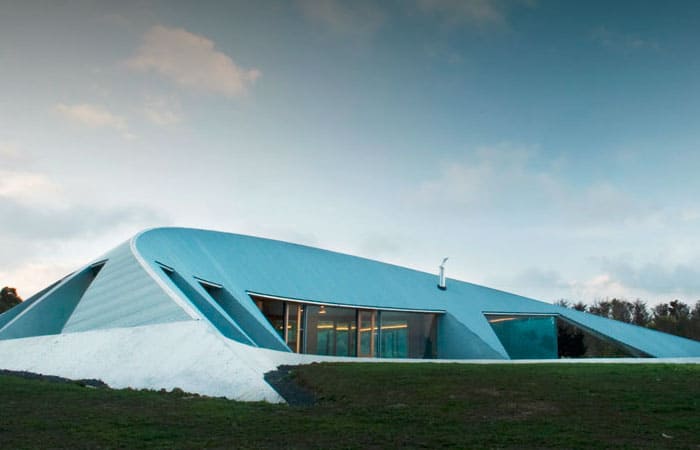 Forty-two entries from a field of 240 have been honoured in the Australian Institute of Architects’ 2013 Victorian Architecture Awards at a special presentation evening tonight.

The state’s top award of the night, the Victorian Architecture Medal was awarded to RMIT Design Hub by Sean Godsell Architects in association with Peddle Thorp Architects for its expression of the purity of an architectural idea in an elegant and harmonised composition’.

Home to RMIT’s diverse range of design research and post graduate education, the Design Hub was also awarded two Named Awards by the juries, the COLORBOND® Award for Steel Architecture and the top public architecture honour, the William Wardell Award for Public Architecture.

In total, 11 Named Awards, 20 Architecture Awards and 21 Commendations were presented on the night in addition to the prestigious Victorian Architecture Medal, Melbourne Prize, Regional Prize and the Bates Smart Awards for Architecture in the Media.

‘The property has been sliced and divided into exquisitely proportioned interior and garden spaces. Each extends into the other, creating a seamless amenity and high degree of privacy and transparency. As poetic as it is rational, this house is beautifully robust,’ the jury reflected.

A sensitive redevelopment of one of Melbourne’s unique heritage performance venues, Hamer Hall by ARM Architecture was praised by the Interior Architecture jury for ‘skilfully accentuating the heritage qualities of the building while at the same time creating a stunning landmark addition to the Yarra River precinct’.

Hamer Hall’s revitalisation was recognised with the Marion Mahony Award for Interior Architecture and the John George Knight Award for Heritage Architecture.

The restrained strategy to use bronze to express the new works offers legibility between old and new fabric and reflects the original architect’s (Sir Roy Grounds) approach to an enduring materiality. This skifully resolved civic architecture respects the legacy of Grounds’ raw exterior and John Truscott’s plush interior for future generations,’ the Heritage jury said.

‘We were impressed by the commitment and rigour shown by both client and architect in creating an internationally leading venue. Elaborately detailed and meticulously executed, the over-scaled corrugations in the city facade curate views into the heart of the interior while allowing casino patrons spectacular views of the Melbourne skyline,’ noted the Commercial Architecture jury.

The Allan and Beth Coldicutt Award for Sustainable Architecture was selected from the entire field of entries and was awarded to Crofthouse by James Stockwell Architect.

‘Quite early in the assessment process a single project emerged from the crowd to announce itself with a clear voice above all others. Subsequently, throughout a rigorous process, that project remained to become a unanimous, clear leader and as fresh as the new day. At the heart of the brief and throughout design and construction, Crofthouse presented new design ideas which offered a more sustainable future for the planet.’

‘Social sustainability has been deeply considered by the architects, resulting in a non-institutional response that provides an exemplar for social housing and homes for many clearly happy residents.’

Rebuilt following the 2009 bushfires, the Marysville 16 Hour Police Station by Kerstin Thompson Architects forms part of the re-establishment of the town centre, ‘The Marysville Heart’ and was the recipient of the 2013 Regional Prize.

‘The combination of mature composition, clever planning and geometry, along with a soaring spirit, make this building a wonderful addition to a town that deserves great architecture.

Nest Architects’ Seventh Heaven project is the fitout of seven student rooms on a new level seven, within the existing roof space of a Romberg Boyd student residential tower at Ormond College, University of Melbourne and received the Kevin Borland Award for Small Project Architecture.

‘This is a student garret, designer style and a worthy recipient of the inaugural Kevin Borland Award for small building works.’
The Enduring Architecture Award was presented to ICI House 1958 (now Orica House) by Bates Smart & McCutcheon.

Two projects were awarded a National Bates Smart Award for Architecture in the Media, Dream Build by ABC TV and Future Practice:

Conversations from the Edge of Architecture by Rory Hyde. Justine Clark received a State Bates Smart Award for Architecture in the Media for Parlour: women, architecture, equity.