How to handle conflict among your employees 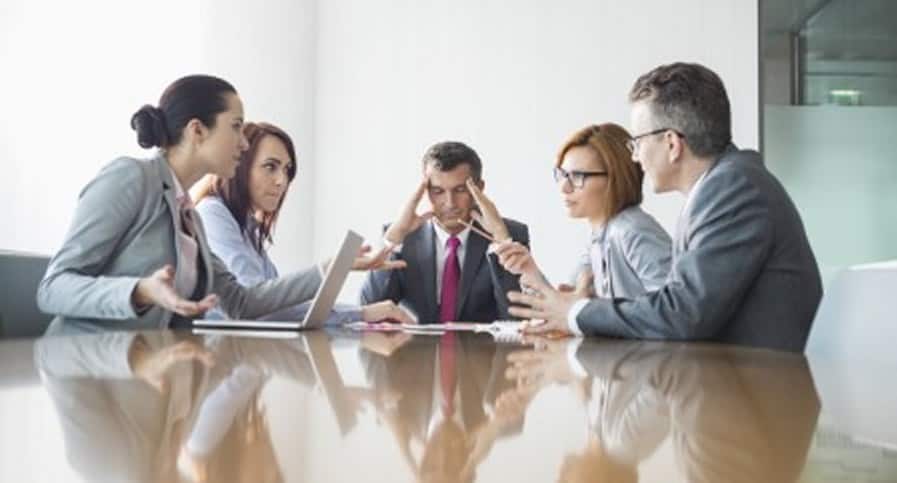 In a perfect world, every person you’ve ever hired is a completely mature adult who is very socially aware, takes almost nothing personally, and has a nearly super-human ability to turn the other cheek when others don’t display similar qualities. Unfortunately, we don’t live in a perfect world—we live in this one. Sometimes you will be faced with having to deal with professional (or unprofessional) conflict among your employees, conflict that may even detract from the normal productivity in the workplace.

While you may feel, as many do, that you can’t be bothered with your employees’ personality clashes, these are the sorts of problems that can escalate and affect the company’s reaching its goals. Morale can slowly erode over time as problems are left unaddressed and your employees start working against each other instead of as a team. Workplace politics can be very costly, and you will want to limit this kind of inefficiency as much as you can. So if you find that employees turn to you when they feel that there are unresolvable personal issues on their level, you might want to step up to the challenge and stamp these problems out at their root using some tried and true guidelines:

It’s easy to delude oneself that a conflict doesn’t exist by sweeping it under the rug. For many people, this is their very definition of “professionalism”–to essentially pretend as if human nature and conflict is non-existent, rather than to address it directly in a mature way. You may be tempted to simply chastise your employees for their in-fighting, or to encourage them to ignore the seething problems underneath, but this will only lead to the illusion of peace. You might very well find over the long-term that your denial will come back to haunt you. Allow your employees to be honest with you about what is happening, and don’t try to compel them to sugar-coat things.

2) Strive to be non-judgmental.

Do you want the truth? If you do, then your employees need to feel that you won’t over-react or otherwise make snap judgments about what they will share with you. Get both sides of the story during conflict-resolution, and try to remain as impartial as possible during your information-gathering phase. Even if you hear about an employee doing something highly inappropriate, suspend your reaction for the moment, and listen carefully. This will encourage people to tell you the whole story, rather than just what they think you will be able to tolerate well. To truly get to the root of the problem, you will need the whole story.

3) Examine issues as quickly as possible and as they come.

If you preferred to ignore conflict in the past, you may have noticed how it can seethe and blow up over time. Sure, some problems can “take care of themselves,” but this isn’t usually the case, so address conflicts as you become aware of them and smother them before they become bigger problems.

If John comes to you complaining about how he thinks Karen took all the credit for the last major project, take this small resentment seriously and bring it out into the open before it turns into an all-out war of egos between two employees.

When discussing the problem with your employees, try to see where they might agree amongst the disagreement. Using this starting point, you might actually be able to discover that the conflict was due to a misunderstanding. Often times, it is exactly as the cliché says: 10% of arguments are due to a difference of opinion; 90% are due to a wrong tone of voice.

5) Make a plan together that ends the tension.

Ideally, all parties are involved when you come to a decision about some kind of resolution. Beware, however, of “compromise,” as it has a tendency to give both sides of the conflict less than what they want. It is much better to think win-win, and try to find a way for all employees involved to save face and have their needs met if possible.

6) Be pro-active about conflict resolution.

One of the best approaches is to simply address problems before they even happen. If you see an employee being negative, stepping all over the boundaries of others, or simply behaving in a way that invites conflict, bring it to his attention. Many people aren’t aware of how they affect others, and they may not even realize that the way they act causes the people around them to resent them.

In particular, examine employees that are in leadership or managerial positions. Power—even in relatively tiny quantities—can enhance personality problems, and an accumulation of small injustices against employees that are lower in the hierarchy can be disastrous for morale. For these sorts of people, do your best to encourage self-awareness.

7) Screen problematic people from the beginning.

When assembling your team, it is extremely important that you take personalities into account as much as you do technical ability. It would be great if people could always put their differences aside and focus on their work with the precision and depersonalization of a fleet of robots, but technology is not yet that advanced. In the meantime, you will have to screen your employees as best you can before you even hire them.

While you are interviewing potential team members, ask them about their personal relationships with coworkers at their previous place of work. Ask them about conflicts they’ve had in the past and how they handled them. If your prospect seems to pit the blame on others and seems to take no responsibility for his hand in things, then think twice about bringing him in.

As someone with a lot of influence, you could easily out-muscle anyone who disagrees with you by invoking your rank. Instead, show understanding towards others. Don’t take things personally when your employees have differing opinions from yours, and give each idea respect and consideration, even if you don’t personally agree.

Mediating conflicts between employees and dealing with other similar human problems can be one of the more difficult parts of being in a leadership position. Simply remember to remain calm and address the problems directly, rather than trying to ignore them, and half the battle is already won.