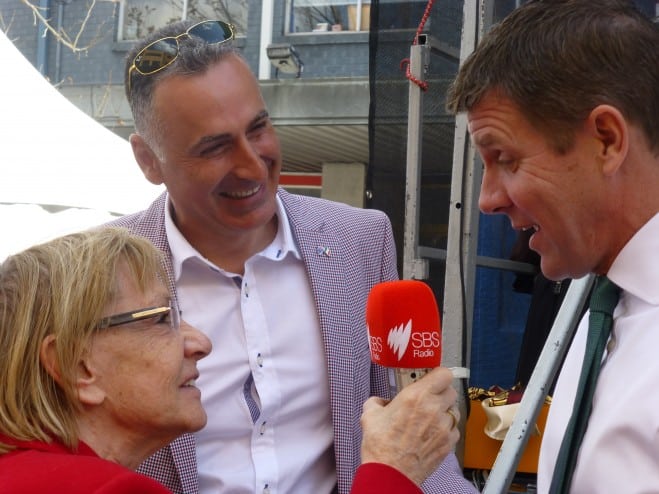 NSW MP John Sidoti was elected as the representative for Drummoyne in 2011, a seat that had been a Labor stronghold since 1962. The swing to Sidoti was greater than the state average, and he increased his vote in the 2015 election, even in the face of an overall swing against the party.
The son of Italian migrants, he ran a function centre in Five Dock together with his family, before turning this attention to politics.

“I got involved with politics at a young age. I was a member of the Young Libs when I was fifteen years old. At the time the Young Liberals President of the branch was John Brogden. John Brogden actually inspired me to run. When he became the Leader, I looked at representing my area of Drummoyne.”
Before entering state politics he was a councillor on the Burwood Council, serving as mayor from 2009. In 2011 he stood down, remaining as a councillor as he took up his position as a NSW MP.

“A million people will be making Sydney their home shortly. A thousand people a week move into Sydney, and the bulk of them are going to be in Western Sydney. Allowing more density into established areas is a necessity. The growth of population, new schools and keeping up with the demand in hospitals.”
“Transport is the lifeline of this area. When you see the growth, particularly in the western end of the electorate there’s so much high density living going on. The challenge is to keep up with that by encouraging public transport. This area (Concord) has been notoriously average for public transport. With the growth and additional services going on, the challenge is to grow public transport at a faster rate than the population. It’s one of the fastest growing electorates in the state.”

“It’s about priorities. First and foremost you have to represent the community. My responsibility is to the community first, before the party.”
“You only have to show your electorate that you’re out of touch by focusing on yourself and that’s death in politics. Get in there, get your hands dirty. People don’t want politicians, they want community representatives.”

“If I had to give advice, I’d say get some life experience. Get out there and employ some people and see what it’s like.”
“I ran a function centre for fifteen years with 30 staff before I got into Parliament. I know what the problems associated with business are, and I think that will drive a lot of the change by having people who have done something with their lives before entering Parliament.”