Lions Clubs prepare their “good ideas organisation” for the future 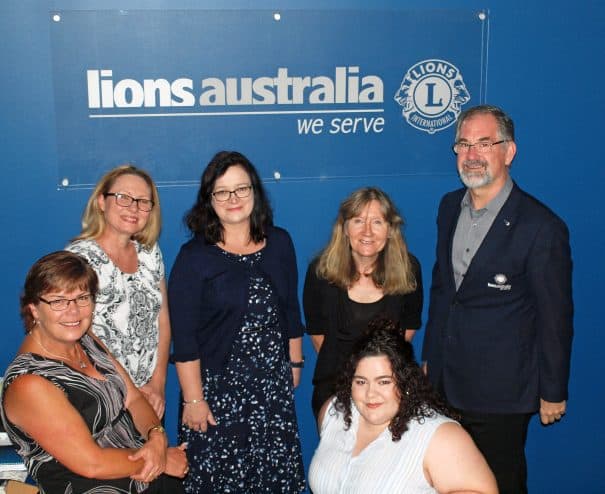 Lions Clubs comprise an apolitical and secular organisation of 1,200 clubs nationally and an international membership of one and a half million individuals. Mr. Oerlemans gave an introduction to Lions Clubs many operating areas, and spoke about how Lions Clubs are embracing new challenges including digitisation and changing volunteering habits amongst younger generations.

Executive Officer of Lions Australia since 2006, Mr. Oerlemans has seen Lions Clubs address broad and ever-changing needs on a local, national and international level, saying “When I talk to people outside of the organisation, I say: When you think about a need in the community, you can be fairly certain there’s a Lion’s Club either nationally or locally that’s been involved in doing something about that issue.”

Lions Clubs members serve the community without a personal financial reward, which Mr. Oerlemans said fills many members with a sense of citizenship and service to county. “many Lions will give up more in their voluntary role than some people in their day to day jobs.” Mr. Oerlemans said.

“People often think there’s a bit of mystery about Lions Clubs,” Mr. Oerlemans said, “at its core it’s really just a group of interested, community spirited individuals who decide to get together at their local community level and do something positive to improve it.”

Lions Club members join at a club level, and clubs join the Lions Organisation. While each club decides on its own program, there are national initiatives which bring several clubs together. “Lions join Lions Clubs and stay with Lions Clubs because they become their family. Working alongside other people brings us together and keeps us together.” Mr Oerlemans said.

Amongst staples including food drives, helping out sporting and community events, and fundraising, Mr. Oerlemans detailed several other large initiatives Lions Clubs have taken on, “We’ve got a long history in blindness prevention and sight improvement, and we find work for the most needy in the community.” Mr. Oerlemans said, “We’ve also got a long tradition of environmental projects, you go to most towns in the county and you’ll find a Lions park, those were established many years ago, but also modern Lions Clubs are getting involved in tree planting around the country and development of wetlands and local facilities.”

Efforts from Lions Clubs national initiatives include a major initiative looking to cure children’s cancer, The Australian Lions Childhood Cancer Research Foundation in partnership with the Garvan Institute is currently mapping the genome of 350 children with cancer.” Mr. Oerlemans said, “We’re also better understanding the process of the disease and looking at the sort of treatments that can work. And it’s not only about research, it’s directly helping those participating in the study.”

As Lions Clubs have no single goal, they are able to use their efforts to react quickly and effectively to needs as they arise, a quality which is particularly effective in disaster relief, “One of the great things about Lions is that when the emergency and the disaster is finished we don’t walk away. We stay there and help the people who have been affected.” Mr. Oerlemans said.

Mr. Oerlemans credits the fact that Lions Clubs don’t take public money to cover their operating costs as a key factor which makes Lions Clubs unique amongst most other national and international Not-for-profit organisations, “Not only do we rely on members to give up their time, we also ask them to pay fees to support the infrastructure of the organisation and all of our running costs.”

“What that means, for example, is that when a member of the public donates ten dollars to their Lion’s Club, towards for example our kid’s cancer project, every cent of the donation goes to where it’s intended. That’s pretty important to our members.” Mr. Oerlemans said.

The Future of Lions Clubs

For Mr. Oerlemans, the future of Lions Clubs lies in adapting to changing people and social climates, and in embracing changes in technology. “We’ve changed quite dramatically and we’re continuing to change. When I started we were very much a traditional organisation, that sent letters in the mail and communicated face to face.” Mr. Oerlemans said, and whilst he notes that the organisation still conduct many important affairs in this manner, “In that time we’ve moved very quickly to emails. Every club has developed it’s own digital presence through an online website we offer to clubs. Most of our clubs are engaged in social media for communication and promotion.”

“As an international organisation we’ve just celebrated our centennial, and part of that has been about looking at how we can extend ourselves into the modern world.”

Alongside changing technology, Mr. Oerlemans suggested Lions Clubs are moving toward a more flexible approach which will encourage younger members to join. “We know we need to reach out to younger people.” Mr. Oerlemans said, “Whilst we’re probably seen as an old person’s organisation, many of our long-term members started when they were in their thirties.” He identifies that younger demographics bring with them different attitudes toward volunteering, and the organisation has willingness to adapt in order to accommodate them, saying, “Our members join a club, and they commit to being a volunteer for a long period of time and some members a lifetime. But we recognise that younger members are used to a different sort of volunteering, they like to chop and change drop into a land care activity or a tree planting activity. Or they’ll get involved with crowdfunding for a friend of theirs who is in trouble, or they get involved in an event, like volunteering for the Olympics, and then they’ll drop out again. What we need to do is work out how we can include those individuals in our organisation, which is very much an institutional organisation, and work with their needs, use their capacity, and let them go on their way to do other things. Knowing that some of those, when they reach a point of time in their lives when they can give more to a volunteering organisation, will come back to us and say they’re willing to make a deeper commitment, that’s a challenge the organisations are working through.”

More changes for Lions Clubs will come at a structural level, “The organisation has always had this idea that you serve as a leader for twelve months, we have a national board that we call the council, they’re in there for twelve months and then they move on. They move back into their club life and someone else takes on the leadership role. This helps to manage our members other commitments.” Mr. Oerlemans said, “We know that as an organisation and a legal entity it makes it difficult to get continued momentum in what we’re doing, in growth and in change. So within Australia we’re working through the concept to have an advisory board which can actually be an ongoing leadership entity to work with our elected official and keep things going in-between times.

As Lions Clubs adapt to meet new changes on both a club, national and international basis, Mr. Oerlemans is optimistic that the organisation can adapt and change, both in the scope of its output and in its structure. “We think that part of the way we will succeed and grow in the future is if we have a group that learns and develops, and can involve our elected leaders in processes of innovation, change and growth in the longer term. “Mr Oerlemans said.