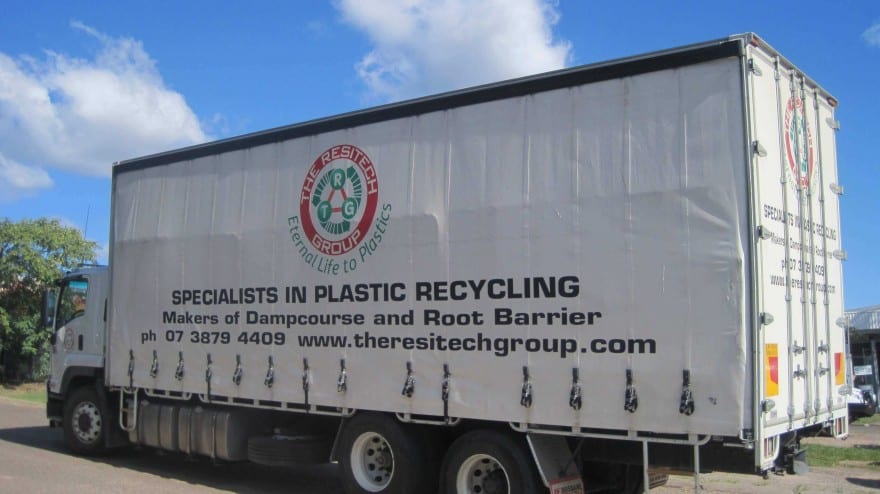 Resitech Industries, a subsidiary of the Resitech Group, is a company with thirty years experience in the plastics business and a major recycler of post-industrial plastic waste. With its main manufacturing operation based out of Brisbane, the company specialises in Polyolefin plastic waste, which it both recycles and reuses through its two distinct approaches to the business.

Yinon Trieger
The company’s Managing Director, Yinon Trieger, was born in Israel. A farmer by trade, Mr. Trieger came to Australia just after he had finished studying and soon fell in love with the country.

In 1980 he started working in the recycling industry, as a partner in a company run by his father-in-law. The company recycled plastic waste in Melbourne, specialising in waste from the manufacturing of master batches, which are colours for plastics, as well as the manufacturing of pipe and film.

“That’s where I started with the basic knowledge that I picked up in the plastic industry,” Mr. Trieger says. “I then moved into Queensland as we had an opportunity in a market that had no recycling services to start recycling plastic waste.”

Mr. Trieger began working for a company called Plastic Recyclers Queensland, the first recycler in Queensland to acquire a local collection company, whereupon he commenced a collection and recycling factory for plastic waste.

In 1984, Plastic Recyclers Queensland became Polymer Corporation, a company that is now a part of the Resitech Group. The Resitech Group is a collection of companies, specializing in the recycling and manufacturing of recycled plastic end products and resins trading under the name of Resitech Industries.

“Resitech was created as a company to be able to do recycling and finished product; Resitech is actually a short name for Resin Technology. That’s how we came up with the company name.”

The company has two approaches to the business: one is the recycling of resin from plastic waste, and the second is the creating and selling of products made from that recycled resin. “

It has changed a lot,” Mr. Trieger says, when asked about the shifts in the industry since Resitech’s inception. “In the beginning we were absolutely clutching at straws to be able to recycle, because at that stage there wasn’t any machinery.”

During the 1980s there were several other Australian companies starting in recycling, mostly in Sydney and Melbourne, but Resitech credits itself as one of the first to be working with recycling in the country.

Even though the scale of manufacturing in Australia is dropping, the advances made in plastic recycling over the last few decades means the industry is bigger than ever.
During the early years, the majority of waste was produced by companies in the plastic industry, which created plenty of excess plastic from the manufacturing of new products.

“Mainly [it came] from film extrusion—companies that were making plastic bags, or wrappings and packaging and generally what we call soft plastics, a product which is normally between fifty to five hundred micron in thickness.
That’s fairly thin.”

Resitech would then buy the plastic waste for recycling, a process known as post-industrial recycling. But the landscape soon shifted from this traditional method, due in the most part to advances in technology.

“Although the machinery became better and more efficient,” Mr. Trieger tells us, “and with less waste, there was still more waste because more plastic had been consumed and demand for recycling has increased.”

Perhaps the most significant industry change came in the late ‘80s, when Resitech started to work on post-consumer recycling. This began with the collection and recycling of milk bottles creating a whole new challenge for the company.

During that period various councils experimented with this method of post-consumer recycling, and the trend soon became fashionable. Now almost every council in Australia has some recycling program of this kind in place, either running it in-house or employing contractors to do the job.

Resitech Industries services clients all over Australia with much of its business originating from the east coast, Victoria and Queensland. The plastic waste suppliers with which it works are mainly in New South Wales and Queensland.

A large area of the company’s business now comes from collecting waste from the mining industry. All aspects of the mining industry—sand, coal and even gas—are seeing increases in the use of plastic, mostly in the transport of water or effluent and are now required to remove the plastic waste off-site for recycling.

“When they finish with a particular project,” Mr. Trieger says, “they need to get the used pipes out of the ground and recycled, or sometimes they just change them after so many years and upgrade; they go bigger normally.”

Gas mining activity in Queensland especially requires more piping in order to accommodate the amount of transportation needed and this has become a large source of business for Resitech.

“There are various stages in the operation; you start with a smaller pipe, then going to a bigger pipe, going through pumping stations, [where] they’re actually cleaning the gas, then they send the water for recycling, the gas going into compressors.”

Some of the gas is now being used straight from the ground, cleaned and separated from water and used for power mostly in smaller power stations employing more efficient technologies and therefore operating solely from gas.

“As part of the by-product of using, storing and moving the gas and the water, there is plastic pipe,” Mr. Trieger says. As a result of large networks of piping, off-cuts are created. The company then takes these off-cuts as plastic waste for recycling.

“That’s something that we will grow, because obviously there are a lot more wells that need to be drilled. However, because of the resources sector slowdown, prices have gone down and the flow-on effect in the sector has impacted on the growth to service the industry with removal of this off-cut waste, however we believe it will continue to develop.”

Recycled Products
The company’s supply comes from various producers of plastic waste, mostly from the plastics industry in the form of packaging. It has now become a lot more viable for companies to use plastic in their operations because of the wealth of recycling options that are available.

The second arm of Resitech’s business is the design and creation of products from the waste supplied by these companies. The company has a special technology to treat recycled re sin ensuring the product i s of a higher quality than its original form.

“It’s very important,” says Mr. Trieger, “that when we get the plastic waste, we grade it, quarantining contaminated waste so it is not used. The grading of the various waste is paramount to the success of the business as rubbish in- rubbish out. The utmost QA procedure is conducted to ensure the waste cleanliness and labeling prior to the recycling process. Then we allocate the graded resin to meet the specs of particular products to ensure the quality will meet Australian standards.”

One such product is poly Damp Course for the building industry. When a house is built, a plastic Damp Course is used to stop water rising through the walls, the bottom of the house and the windows.

Another key product is the Slip Sheet, which is made for the export industry for companies selling food and drink product overseas. Instead of putting the product in a container with a pallet, they are now using plastic recyclable Slip Sheets.

“What you do is stack that on the pallet then there is a special attachment on a forklift – called a push-pull attachment and you actually lift it off the pallet and move it into the container, eliminating the use of a wooden pallet and saving on fumigation.”

When wood is shipped globally, the container it is shipped in needs to be fumigated to protect from bacteria which can be a problem for companies receiving foodstuffs. The use of a Slip Sheet prevents this fumigation from being necessary.

Another of Resitech’s creations is a garden product called Root-Gard, a root barrier sold mostly to councils and landscapers to prevent roots from growing into areas of the house and garden that might be detrimental to the property.

Resitech sells these products through distributors, very rarely going direct to the client. Products are also sold to other businesses such as window companies, and can be found on the shelves of major hardware chains.

Staying Competitive
Despite industry concerns such as low margins, high power and labour costs and the issues created by the government’s recent carbon tax, Resitech endeavours to stay competitive, currently hitting an annual turnover of around $6 million.

The carbon tax in particular has created a significant financial strain due to the electricity needed to aid production. “We are high users of power,” Mr. Trieger says, “as we require high temperature to melt the plastic and then recycle it.”

Plastic is by no means perfect, and there are still significant problems with the material, especially in terms of its difficulty to break down which has created a surplus of plastic in the ocean.
“Plastic is like a computer—so if you put garbage in, you get garbage out. However it is a clever material and it came to replace wood, glass, steel and paper and has succeeded very effectively.”

But plastic’s strength has made its use far more common in the modern day. For instance, polyester piping will have a greater chance of staying intact during a small earthquake than most other materials, meaning it has become the preferred option.

Mr. Trieger agrees that there is room in the industry for new technologies and more advanced recycling processes, especially in terms of producing the same recycling output whilst using less power.

“That’s what we’ve done and are constantly striving to do into the future including being successful in getting a grant from the government to be able to get machinery which is more energy efficient and able to produce basically more kilos for less power/hour.”

The grant has allowed the company to be more innovative in its business, working with machinery that will be capable of dealing with a variety of products, increasing the scope and efficiency of Resitech’s operations whilst providing a monitoring system of power auditing to constantly manage the power usage.

“We offer a service in a complete form, ” Mr. Trieger concludes. “We now have our own collection service with skip bins, some smaller bins, larger bins and we can give that service to our suppliers to further expand the recycling opportunities that the market is requiring whilst remaining cost effective in the delivery of the service.”

Find out more about Resitech Industries:

This Resitech Industries business profile has been made possible by the generous support of: