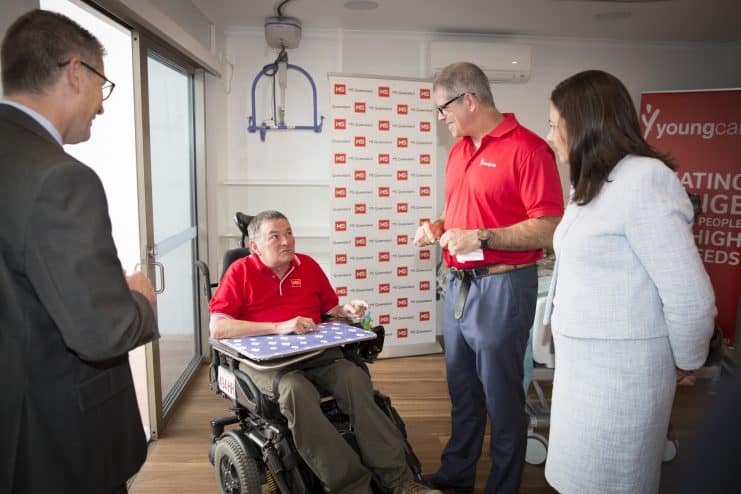 Anthony Ryan is the CEO of Youngcare, a not-for-profit which has received national attention for their work in establishing and facilitating living spaces for people with disabilities between ages 18 and 65, and working toward a future where young people are given the “young lives”.

Mr. Ryan believes they deserve. We spoke to Mr. Ryan about how Youngcare are embracing the National Disability Insurance Scheme (NDIS), running their not-for-profit business like a corporate, and why on every whiteboard in their office Youngcare have written the phrase “Make ourselves redundant”.

While Mr. Ryan asserts that Youngcare was “born out of a gap that existed in the social infrastructure of Australia.” He also mentions that the company was incited by a real need, when Mr. Ryan’s friend, Dave Conry, realised first-hand the failings of the Australian disability space, while looking into care options for his wife who had been diagnosed with Multiple Sclerosis.

“During that time he found it more and more difficult to look after her and, started looking for care models, finding only nursing homes and aged care facilities. Ultimately that drove him to really start engaging government and media, to say ‘Well is this really all that’s out there to help young people who have been given a really hard journey in life?’” Mr. Ryan said.

Mr. Ryan joined Youngcare in 2016. Three close friends, also mutual friends of Dave’s, had left their own successful careers to form Youngcare thirteen years ago, and finding he admired what they were doing, Mr. Ryan felt honoured to join them. Saying, “When I was asked whether or not I would consider becoming CEO of Youngcare, it just felt like this incredibly natural progression, but it was also an incredible honour. Because I saw four of our mates, four people who had done something so well, and brought attention to the issue and led the issue nationally, I thought I could carry on their good work.”

Mr. Ryan says that Youngcare are not themselves care providers, but find their strengths in building networks, setting up stakeholders, “looking at the gaps,” in Australia’s disability space and finding real and viable solutions. They define young as between ages eighteen and sixty-five, maintaining that these are the ages in which an aged care facility is not an adequate support space for people with disabilities.

“We don’t think a person who is 45 wants to live in a nursing home.” Mr. Ryan said, “They want to live somewhere that gives them access to facilities, gives them access to pubs, shops, cafes, movies concerts, sporting venues, things such as that.” Mr. Ryan and Youngcare believe these availabilities are vital to make people feel energised by where they live, and Mr. Ryan notes statistics which have said that a young person living in an aged care facility will be visited less than three times a year. This isolation is something that no young person should be feeling, regardless of their care needs.

“I couldn’t think of anything worse,” Mr. Ryan says.

Youngcare has worked with Cox Architecture in designing fully automated spaces which also celebrate youth, independence and choice. Their work in designing spaces and designing homes “people want to live in,” has led Youngcare to become experts in other fields within the disability space. Mr. Ryan mentions that their previous work has enabled them to expand with other services including Youngcare Connect, a free support line to inform people trying to navigate themselves through the disability space. “We have people who man the phone and assist them in how they navigate through the best care, residential options, even other people they can connect with.” Mr. Ryan says.

As Youngcare establishes themselves as knowledgeable thought leaders within the disability space, individuals, families and other not-for-profit companies have come to them for information. Youngcare are happy to share their information. An attitude which has established them as an impactful and innovative organisation, and has resonated with many media bodies.

Youngcare has the motto “Make Ourselves Redundant” written on each of the whiteboards in their office, and Mr. Ryan says this attitude instils a sense of personal responsibility. “That’s what drives us.” Mr. Ryan says, “We don’t want to be feeding ourselves into a role. We all know, that if we’re successful in what we do, in ten years’ time there will be no need for Youngcare.”

Mr. Ryan credits the way Youngcare has engaged with media bodies to tell the stories they believe aren’t being told, saying, “We’ve been able to tell the story very well, and people in Australia get surprised by that. They get angered that people on their watch are getting treated in such a negative way.” He suggests that the company’s mission to make themselves redundant has resonated with media agencies and corporations, who feel a responsibility to use their role in helping Youngcare achieve their goal.

“It almost becomes infectious, this energy around us. We have had movie stars, rock stars supporting us because we communicate well with them. We let them feel impassioned with our idea, but we also say to them, our success will mean the death of our organisation.” Mr. Ryan said, adding “We don’t want to grow, we just want to be loud, we want to disturb, we want to solve the issue and then move on.”

Mr. Ryan lists Channel Nine as one particularly supportive media outlet, who identify with their own responsibility to Youngcare’s cause, “I walked out of Channel Nine two weeks ago, as I got into the car and drove away, I was almost numb by what they had just offered us. We went down with 12 ideas to try and build our relationship.” Mr. Ryan said, “Some of them we thought were outlandish, but at the end of the meeting not only had Channel Nine agreed to all twelve, but they actually suggested three others. They want to tell the stories of the people who need support. They want to, in some ways, create a little outrage in Australia.”

Whilst Youngcare aims to disturb and to create a sense of outrage amongst Australian people, Mr. Ryan says that they at Youngcare are not angry at the Australian Government. He is instead interested in working with the Government, and feels that the new National Disability Insurance Scheme (NDIS) is an indication that the Government is willing to proceed with positive changes within the disability space. Mr. Ryan called the NDIS a “quantum leap,” in the right direction.

The National Disability Insurance Scheme aims to move the focus of disability services away from institutions and toward the individual. This refocus on the individual treats people with disabilities as “customers, rather than numbers”, and seeks to work based on individual needs.

“A lot of organisations are going to be impacted in quite significant ways [by the NDIS],” Mr. Ryan says, “because the way they set up their structure relied on grants and Government funding, and acting as a not-for-profit rather than as a corporate-minded organisation looking after their own sustainability.”

“We believe our media presence needs to drive that sense of optimism.” Mr. Ryan said, “We will be, over the next three years, utilising our space, network, and voice to sit down with Government. We realise we’re in a privileged position where we’ve been asked our opinion, and we think our biggest space is in assisting in the SDA component of the NDIS.”

The SDA is a Specialist Disability Accommodation package available to close to fifty percent of young people with high care needs. The package incentivises developers and investors to build for people who possess an SDA package, and Youngcare is able to bring their experience into the equation.

As Youngcare further intertwine their expertise with Government, corporations, individuals and carers within the disability space, the company are steadily working toward their end goal of young lives for young people, and a world which doesn’t need Youngcare. “One of the things which drives me every day as I get out of bed is that we can be part of solving a social issue that has always been part of the Australian fabric.” Mr. Ryan says, “We’ve got this window of time where we can solve this together, and to be part of that is something absolutely special.”